After being at the Boleyn ground for West Ham’s final match there, last night was the first game to be played at their new ground and I was there.

It was a UEFA Europa League Qualifying match against the European powerhouse that is NK Domzale. We had qualified for the competition despite finishing 7th in the Premier League and were expected to coast through the game.

I arrived at the stadium early to take a good look around, getting to know where everything was located and enjoy the build up inside the stadium. Getting there is so easy, it’s one train from home that takes just about 40 minutes and then a ten minute walk through Westfield. There are loads of food stalls outside, all charging extortionate prices and the ones inside weren’t cheap either. 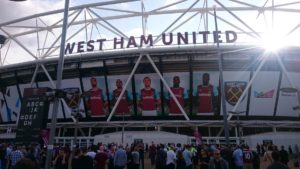 The game itself was relatively straight forward for West Ham despite not playing a full strength squad. Trailing 2-1 from the first leg we drew level when Cheikhou Kouyaté scored the first goal at the stadium in the eighth minute. He doubled our lead seventeen minutes later to give us a 3-2 lead on aggregate and while we were in control of the game, we didn’t put the game to bed until Sofiane Feghouli scored with ten minutes to go.

So the fans left happy. First game at the new stadium and our first win. There’s going to be problems and some people will moan about it not being Upton Park but for now, it’s good enough for me!