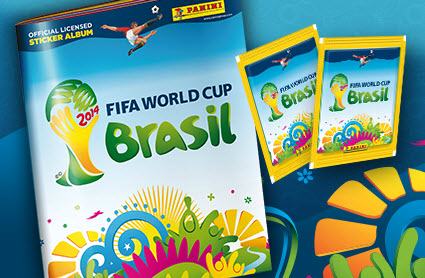 After the fun and success of the World Cup 2010 and 2012 Euros collections, it’s time to get sticking again with the new 2014 Brazil World Cup Panini sticker album.

After being alerted to the release of the new collection by a friend on Twitter, I headed out to start my collection. Trying to find a copy of the sticker album in Central London is a bit difficult, despite traipsing around the newsagents and shops near to my office, I only managed to find two shops in the vicinity that sell the stickers but neither has the album in stock.

So I jumped onto the wonderful thing that is the internet and found the Panini website for this particular collection and ordered my album and 50 sticker packs directly from them. It’s got to come all the way from bologna so should be here in a couple of days.

In the meantime, I’ve signed back up to Swapstick.com so that I can get rid of those dreaded doubles and swap them for ones that I need. I now need to add in the numbers of the stickers that I’ve already managed to double up on.