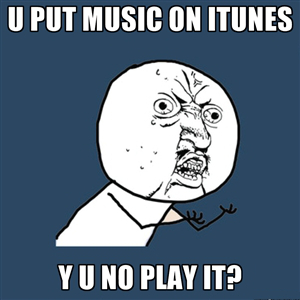 Why You No Play Me?

Over the many years that I’ve been alive, I have managed to build up quite a large music collection. 7″ singles, 12″ singles, cassettes (both albums and singles), vinyl, CDs, minidiscs, downloads. Every format possible.

While I have a few favourite artists, I don’t have a taste for one particular style, so I’ll pretty much listen to anything, one reason why there’s a lot in my collection. It also houses some of the most random-est music ever released.

When I was a kid, and you bought an album, you tended to listen to it all, over and over. Taking in each track and then working out (if you had the cassette version) where to turn it over to listen to your favourite track on the other side.

But in this digital era if you buy an album it’s mainly for just a couple of tracks. So you’ll buy it and then stick it on iTunes and then listen to the few tracks you do know, ignoring the majority of the tunes.

I was contemplating this a couple of weeks ago while perusing through my music collection and it struck me just how much of the music I have got now I haven’t listened to. Compilation albums I’ve bought because it’s got a couple of rare-ish tunes on it. “Best of” albums that contain a lot of filler. Albums I used to ‘borrow’ (long story) and would record, just because I could. There was a lot of music just waiting to be listened to.

So I created a playlist. One that looked at the “# of times played” count in iTunes and if a song had a played-count of zero it was added to the list. Now this wasn’t a true count because about 4 years ago I had to rebuild my music library due to a PC complication (it got fubarred!) and this meant that all songs got re-set to zero. But it was still a clear indication of what music I listened to over and over.

I have a total of 17,745 songs currently on my iPod (not including series of radio shows which would probably add another 100 to that count) and out of that there was a staggering 8,500 songs that have not been played. Nearly half of all the music I have stored on my PC I have not listened to. 47.9% if you want to be precise!

So now that I have it, I have decided to only play this “Why You No Play Me?” playlist until every song has been played at least once. According to iTunes that would take me about a month of constant playing. So I don’t expect them all to have been played any time soon!