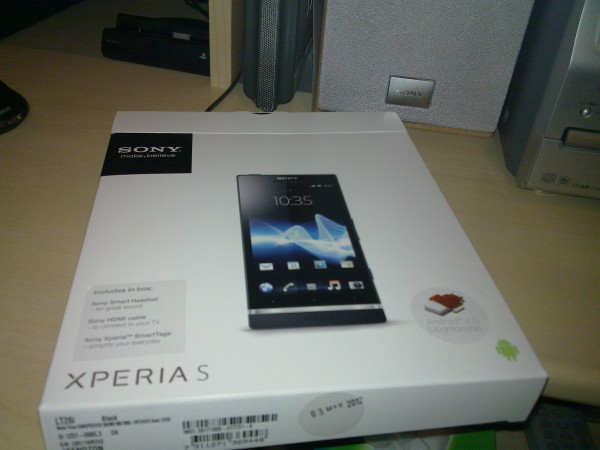 I’m not quite sure how I’d managed it but it has been some months since I last bought something shiny and gadget-like. But fear not, my weakness for such items still exists – it had just been lying dormant – as it was time to upgrade my mobile phone at the weekend and now I have something new to play with!

I’d had my current phone for nearly two years, and while it’s still a good enough phone there had been some problems with it recently. The screen was starting to flicker occasionally (partly my fault) and the battery life was starting to wane. And with it being a Nokia N900, the operating system (Maemo) wasn’t very well supported when it came to apps for it.

And so with my contract up with T-Mobile on Sunday, it was time to start looking round for a new phone. Well actually, I’d started looking a few weeks ago so that I knew exactly what I wanted by the time Sunday came around. I love doing research on stuff I need/have/want to buy. It also stops me from buying on impulse. God knows how many flowers I’ve gone through!

I’d looked at loads of different ones, Samsung Galaxy Nexus, the Galaxy SII, HTC Desire, but not the iPhone because I wanted an Android handset. I also needed to get something for The Wife and so it made sense to get two phones similar (less for me to learn when I have to show her how to use it!).

In the end I decided that what I wanted was the Sony Xperia S, Sony’s new flagship Android handset. The timing was right as it was launched at the beginning of March (have I mentioned I lke NEW gadgets?). And it was a Sony. Bonus! The Wife chose the Xperia Ray as it was the closest phone to the same size as her current one. Women, eh!

Having found the phone I now needed to find the right contract to go with it. And so after more research I decided on a particular O2 contract. Which was a big deal for me, as I have been with T-Mobile since 1997 and I don’t like change (except if it involves a gadget, obviously). One reason to leave T-Mobile was that to get the phone for free on O2 was £15 a month cheaper than T-Mobile. Simple maths dictated the winner.

So we popped into the local O2 store at the weekend and picked up our nice new shiny smartphones.

I then had to phone T-Mobile to get the PAC codes so that we could take our numbers over to O2. I thought they would have made a bigger deal of trying to keep me as a customer but apart from them mentioning that I’d lose the discount I had on one of my lines they let me go without a fight. So much for our long term relationship!

So I have spent the last few days playing with each phone, downloading apps to them and configuring them for our use so that today, when our phone numbers move across they are ready to use.

The Xperia S is a great phone, very light, considering the size of it but very easy to use. It’s got a 12.1 megapixel camera, can record video in HD, is HDMI enabled (although I don’t own an HD TV!) and has a 4.3 inch screen that looks as good as a Bravia TV. Albeit a bit smaller!

I know that I am going to love this phone. In fact I already do. But then I would. It’s shiny, new gadgety. But most of all, it’s a Sony!