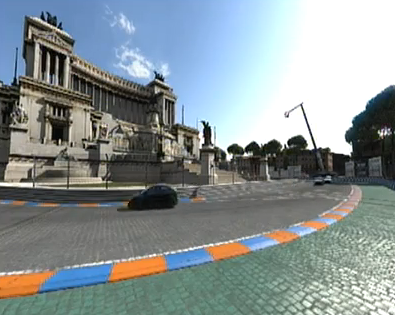 The love for GT5 goes on and on and last night it was the first chance that me, @pileasphil, @jrdobbo and @nicharrison2 had congregated en masse into a GT5 lounge for some racing. Or to be more precise: racing, crashing and banging with some added spinning!

The format for the evening was 3 races on different tracks with 3 pre-determined cars. The cars could be tuned up as much as possible to make them as powerful as they could be. There was a British feel about the cars, as the ones chosen for the evening were the 2007 Mini Cooper , the 2006 Ford Focus ST and the Lotus Elise 111R.

The first race was 8 laps around London in the Mini Coopers. As was expected me and @nicharrison raced ahead and left the other two to battle it out for third place. We battled all the way to the end with the lead changing hands a number of times especially in the latter stages, but I just managed to sneak the win.

The second race was a trip to Rome in the Ford Focusessesess (what is the plural of Focus?). As a friendly gesture @nicharrison2 and I hung back at the start to let the others get a good head start and then we pootled round playing cat and mouse betwixt ourselves for a while. After a few laps we commenced our attack and started to reel them in. With a couple of laps to go they were in our sights.

On the penultimate lap we caught and passed them and @nicharrison2 took the lead. And he looked all set to win, but for some inexplicable reason, he entered the pit lane right after the final corner and allowed me and @jrdobbo to pass him! The idiot!

The last race of the evening was the battle of the Lotus’ on the Trial Mountain Circuit. The Elise is a slippery little car and requires a lot of concentration to keep it on the track facing the right way! The race was probably the most fun of the three as the circuit was a little trickier than the previous two and it made for some interesting maneuvers and a few crashes! I neatly managed to avoid a massive pile up with some quick moves on the wheel!

I can’t remember who won but it’s the taking part that counts isn’t it?

All in all a cracking night that was finished off, after @nicharrison2 had gone to bed, with a quick blast of Zondas around Monaco and then some rallying around Chamoinx, just for fun.

Looking forward to the next one that should hopefully take place in a couple of weeks, gives them time to practice, you see!

Here’s an unedited video of the Rome Focus race. Skip to about 8 minutes in for the last few laps (it’s where the action is) if you can’t be arsed to watch it all!

Not quite sure why @jrdobbo rams everyone right at the beginning of the race or why @nicharrison2 goes into the pits right at the end to hand victory to me. Only they know the truth…